Don’t let this cuteness fool you ~ squirrels are pure evil! 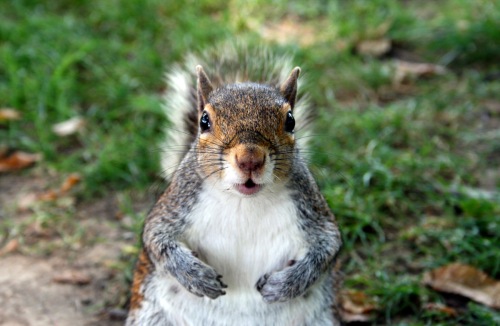 Okay, I’ll admit… I may over exaggerating just a tad, and this is a really super cute photo of one (just look at its wittle questioning face ~ who me?  evil?  no, not little ol’ me, I’m innocent), but I’m not buying it.

When I was a little girl, my dad used to take me and my brother and sister to the park to feed the squirrels on Sunday afternoons.  It’s a very fond childhood memory of mine, so I have no idea where the nightmares stem from.

It’s a recurring nightmare where I am surrounded by dozens of creepy diabolical squirrels and I’m holding my dog; trying to protect him from them.  I’ve had several dogs over the years (all small breeds) and the dog I’m holding varies between them, as does the location where the event is happening, but it’s always the same …  scary freaky squirrels are trying to get my dog.  I seem to know this is a recurring thing because I always think to myself “Oh no, not again!”  Sounds dumb, but it’s seriously really terrifying.  Fortunately, they never succeed in their evil plot for world domination ~ er, I mean in their goal to get my dog, which must indicate something positive in the grand scheme in the dark reaches of my psyche.  I haven’t had the nightmare for quite a while, so that must be a good sign too.

But now I’m afraid these nightmares may take on a new dimension (in reality) because squirrels are digging in my garden!  When I went to check on the progress of my little seedlings the other day, I found several holes in various places throughout my garden, including finding one of my zucchini mounds ruined!  😦  Even though I didn’t catch the culprit in action, I know it’s a squirrel because last year when my brother was staying at my parent’s house, he had a squirrel that he was feeding on a regular basis while he sat out on their patio.  The dummy!

In all of my years of gardening I’ve never had a problem with squirrels before, so I’m kinda clueless as to what to do about it.  I went online this morning to find more information just in case this little wicked friend of my brother’s decides to make a regular habit of being a nuisance, but aside from chemicals and traps (neither of which appeal to me) it doesn’t sound like there is much you can do that will result in any great success.  Squirrels = pure evil…  like I said.

On a positive note…

I found that my lettuce seeds are sprouting! 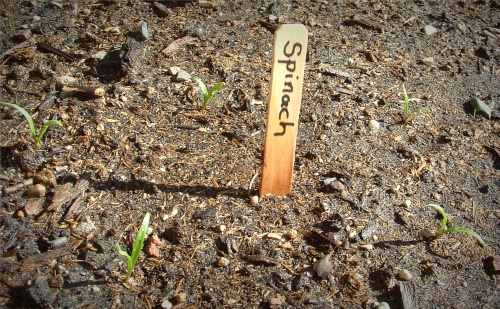 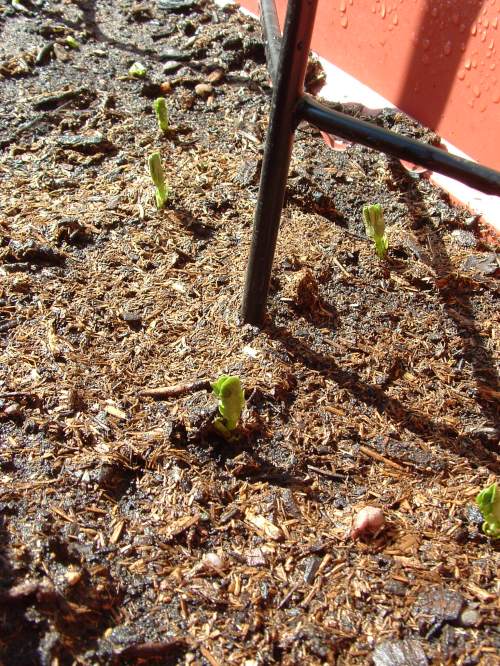 It may be silly, but I just find it really exciting to see all of these little greenies popping up! ♥   I’m still watching for my carrots and zucchini to come up ~ can’t wait!

And next week I can plant my cucumbers!

“Mary Mary quite contrary how does your garden grow?”  Hopefully without an invasion of squirrels…