Ordinarily I would only share a photo and not write anything when I entitle a post as “Silent Sunday,” but I just finished reading this book and somehow it still felt fitting… 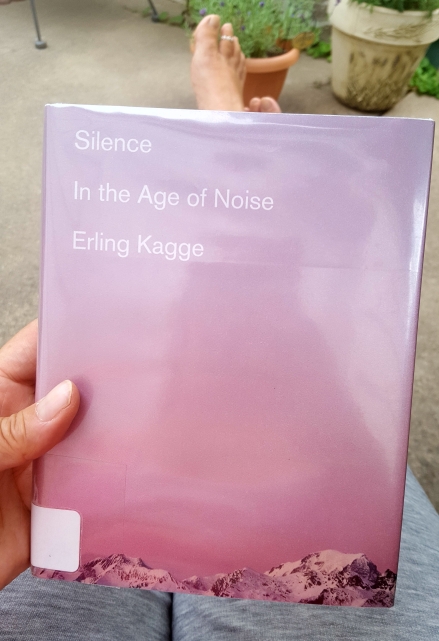 I don’t know if I’ve ever mentioned to you guys that I work in a library.  Many various books pass through my fingers each shift that I work and this one literally shouted at me when I came across it.  Funny that a book about silence would “shout.”  But seriously, the vibes – I just knew I needed to read it… the feel of it in my hands, the soothing color, simplicity and minimalist design of its cover, and the smooth, creamy texture and thickness of its pages, all spoke to me.  (If you also have ‘a thing’ for books, you might relate to what I’m talking about there.)  But it was the subject matter that called to me the most…

Earlier this past spring I had been feeling an almost desperate need to escape and get out of the noisy city.  It’s one of the reasons I arranged several different little adventures for this summer.  (Except, after the extreme heat and high humidity we’ve had this summer, I have now decided that I’d prefer the majority of my future little adventures to be in the fall instead of summer.)  Although my adventures were mostly out of the inner city and out in nature, I still didn’t really feel like I escaped all the noise.  Traveling creates its own sort of ‘noise.’  But I did have little moments along the way when inner silence found me.  And that’s what we’re really talking about, isn’t it?  And that’s the main point of this book.

The inside front jacket cover reads: “What is silence? Where can it be found? Why is it now more important than ever?  In 1993, Norwegian explorer Erling Kagge spent fifty days walking solo across Antarctica, becoming the first person to reach the South Pole alone, accompanied only by a radio whose batteries he had removed before setting out.  In this book, an astonishing and transformative meditation, Kagge explores the silence around us, the silence within us, and the silence we must create.  By recounting his own experiences and discussing the observations of poets, artists, and explorers, Kagge shows us why silence is essential to our sanity and happiness – and how it can open doors to wonder and gratitude.”

It’s a different book than I’ve ever read before.  I’m not even sure how I would categorize it – I think I would call it philosophical more than anything else, and I enjoyed it very much.  It’s a short book, but one to read slowly, as to absorb all of the profound little nuggets of insight sprinkled throughout.

I had an interesting experience happen to me at one point while reading it.  I’m not entirely sure if it was related to what I was reading, but I suddenly experienced what I can only call a heightened sense of awareness.  I was reading it out on my patio – so, in this noisy city, when suddenly my sense of hearing changed.  All of the city noise became muffled and subdued, almost like my ears were plugged or I was under water, but it was only the ‘noise’ that was muffled.  It’s hard to explain… I could still hear completely clearly – the sound of the rustling of the trees was as clear as ever.  So I guess it was more like a shift in my awareness rather than a change in anything audible I was hearing or not hearing.  And there was an acute awareness of the plants in my garden, almost like I was sensing their life energy or something.  The big, heavy leaves of my zucchini were waving to me in the light breeze as if they ‘saw’ me.  I know that sounds weird haha!  I’ve had that happen to me one other time with regard to the trees.  I may have shared it here, I don’t remember, but it was a profound and deeply meaningful experience, and I was excited to have something similar to that happen again.  Like I said, I’m not sure if it was related to what I was reading or not, but it could’ve been.  Ya never know.  It could also just be that I’m weird…

Anyway, so I guess for this “Silent” Sunday I’m giving you guys a bit of a review on a book about silence.  And perhaps also a little insight into my weirdness!  🙃

Wishing you a wonderful, beautiful, blessed day!  May it be filled with moments of silence and peace.