Everything is going well in the garden.  🙂

In fact… it’s a jungle out there!

Haha it just looks like a mass of green foliage ~ you can barely tell where one plant ends and another begins from this angle.

But upon closer investigation…

You can see that my pepper plant is growing nice and strong, and is completely packed full of peppers!

And I’ve got tons of jalapenos too!  Although you can’t really tell from this shot. It’s getting quite difficult to get in there for photos because everything is so crowded.  🙂

My cucumbers are exploding and flourishing upon the new lattice panels and wiring my sis and I put up.  There are so many little cukes developing all over these vines, it’s absolutely wonderful!

We’ve been eating lots of them too ~ such a tasty treat!

Unfortunately some critter has been sampling some of them too.  I found these two casualties laying discarded underneath my trellis.  😦  I was pretty ticked off about this too because just the day before I had decided to leave these two on the vine for just one more day to grow, and then I go out to pick them and find that something nibbled off the skins and ate the insides, then left the rest for the bugs to come and feast upon as well.  Grrr…

And I’m afraid my tomatoes are in trouble.   I’ve never dealt with this before and I’m not sure why this would happen, but I think they’ve got something called blossom end rot.  I’ve been reading up on how to remedy it, so I hope I can.  Wish me luck.  Ew these look disgusting…

But my beans are coming right along.  Although I don’t think they’re getting enough sun because their leaves are lightening a little.  Also, I had expected them to be ready to pick by now and they’re just not plumping up very much. 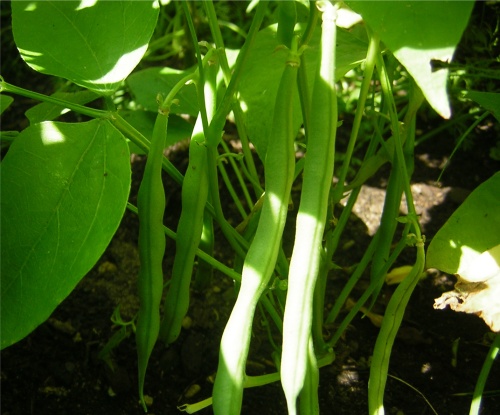 I blame the zucchini.  It’s such a garden hog.  But it’s hard to complain when we’ve been gobbling up zucchinis galore!  And if you’ve been reading my gardening posts, you know of my love for zucchini.  🙂
We’ve been eating them up so quickly in fact that I don’t even have a photo of one to show you…

And two blooming beauties that are at peak right now..

I can’t control my cucumbers!  My little A-frame trellis, although a clever device, can’t contain them.  I probably should have only planted them on one side of the trellis so they could grow up and then over the other side, but I was greedy.  I wanted as many cucumbers as possible growing in my little garden so that I could maybe get enough to can some pickles.  I also wanted to plant at least two different varieties so I could see which I liked better ~ not all cukes are created equal, and there are tons of varieties.

As it is, they now have nowhere to go once they reach the top of the trellis and will get too crowded if I allow them to grow over the other sides.  They are also growing outward horizontally trying to take over the rest of my garden, and hanging out over the sides of my box with nothing to cling to.  Don’t get me wrong… as I said, I want as many cucumbers as I can get, so it is a good thing that they are growing so well, but it also means I have to come up with something so they can continue to grow happily and healthily, and without taking over the rest of my tiny garden.

It’s been hella hot here and I hate the heat.  But what did I do?  I picked THE hottest day out of the bunch (102, which is not common here in Minnesota) and built a contraption to try and help my cukes along.  I enlisted the assistance of my sis (my partner in crime and gardening adventures ;)) and together we came up with a temporary solution.

So we popped into home depot and picked up a couple of wood lattices and tacked them to the sides of my garden box.  Then we took some of the leftover wire that I had from building my trellis and draped it over the top and down the sides along the outsides of them…

The thought is, that now they can grow up through the top, spread out over, and go down along the outsides.  They can also grab onto the insides of the lattice and then go through to the outsides and go up or down from there.  Hopefully this will do the trick.  I’m sure I’ll have to putz with them quite a bit to try and train them up in the way they should go so when they are old they will not depart from it.  😉  The little buggers really do have minds of their own.

A huge thanks to my sis for helping me with this.  It was unbearably hot out there and she hates the heat even more than I do.  Over the years she has taught me so many things and helped me with (and through) a lot, this is just one more thing to add to the list, but it is not taken for granted and is greatly appreciated.  She’s the best big sis in the whole wide world!   ♥ 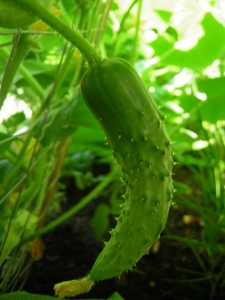 And I’m sure this guy (along with his friends and relatives) are one thing helping those gazillions of cukes along.  Sooo happy to see bees in my garden!  🙂

In the subtitle of this post I also mentioned zukes and this is why.  Found this bad boy hiding under one of my zucchini’s giant solar panel leaves… 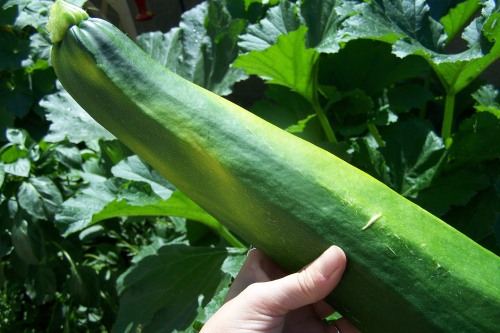 My arms aren’t long enough and I couldn’t zoom out far enough to even get the whole thing in this photo.  So I laid in on the patio table, but you still can’t tell how big it is… 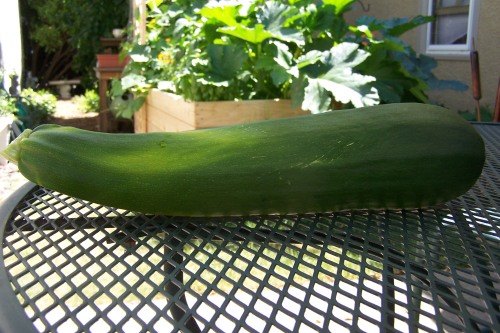 When I brought it inside to show my mom she rocked it in her arms like a baby and kissed it!  Haha!  Guess who is making zucchini bread?  THIS girl!  🙂

Aside from my crazy cukes and zukes, in other gardening news…

I was excited to see my first bell pepper developing!  I didn’t even notice as I was snapping this shot that there was a little visitor there on the stalk next to it.  That would have freaked me out!  I can’t tell what it is, but hopefully he’s one of the good guys… 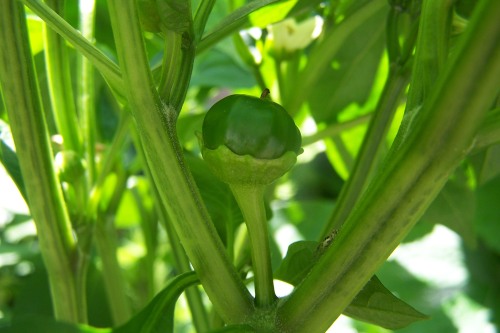 And speaking of peppers, I was also excited to see a few little jalapenos growing too…

On the blooming front…

One of my garden’s companions.  Yep, it’s just an ordinary Marigold, no big deal, but I thought it was pretty.  🙂

Found some sweet, pretty little buds developing on one of my mom’s phlox.

Gosh, who knew Hosta were so lovely…

It was lovely outside today, so I really enjoyed my time puttering in the garden.  One of the wonderful things about gardening is that there is always something new going on each day.  Of course it’s not as much fun when there’s bad things happening like pests or diseased plants, lack of rain or too much of it and so on, but when things are good it’s just so very rewarding.

And it’s especially fun to find unexpected things!  As I was standing at my potting bench filling up my watering can, I looked up and saw this robin sitting on its nest in my mom’s lilac bush only a few feet above my head…

Several days ago I had noticed a mess of grasses and twigs on top of my potting bench, but I thought it was just debris brought by the winds during one of the storms that rolled through.  How exciting that I will be having a family of robins keeping me company now while I’m gardening!  🙂

I keep forgetting to take photos of my peas!  We’ve just been so busy picking them and eating them up.  But today I caught myself and snapped a photo before I popped them all into my mouth (see one is missing ;)). 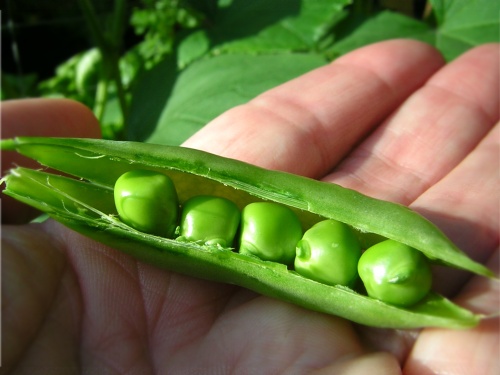 My cukes are really starting to take off and are growing so nicely!

In an earlier post Adventures in Gardening Part 7 ~ Trellis Time, I shared about a little A-frame trellis I built for my cucumbers to climb on, and I’m so excited to finally have them doing just that!  I’ve got two different varieties growing up each side and then my lettuce growing underneath…

An A-frame trellis is seriously an excellent idea for space saving in a small bed.

Strawberries are still continuing to grow in abundance on my one little plant.  Here is another one just starting to show the first hint of color… 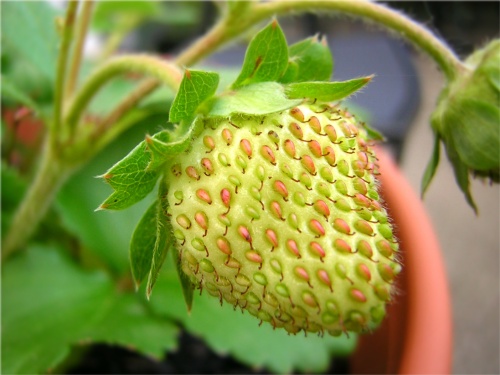 Over the years I’ve always enjoyed growing Astilbe in my shady garden areas and planted some for my mom in hers too ~ they are blooming now. 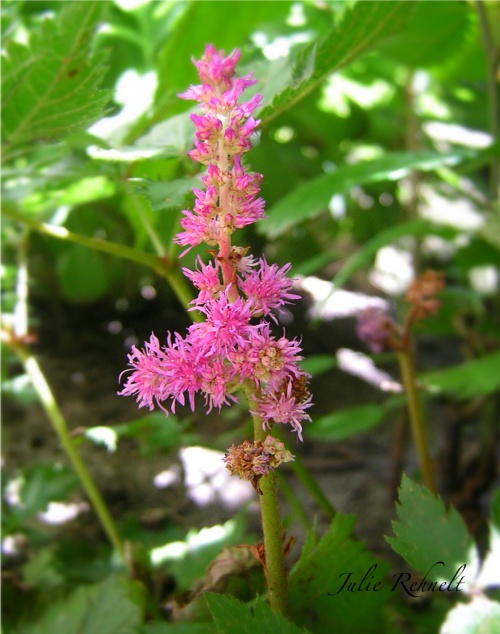 Her Hosta are blooming as well.

At one of the garden nurseries I visited earlier this spring they had a special promotion where the first 500 customers got a free plant.  Mine was this lovely begonia…

Now, I realize that marigolds are quite ordinary and nothing special, but they are still bright and colorful, and a faithful bloomer. 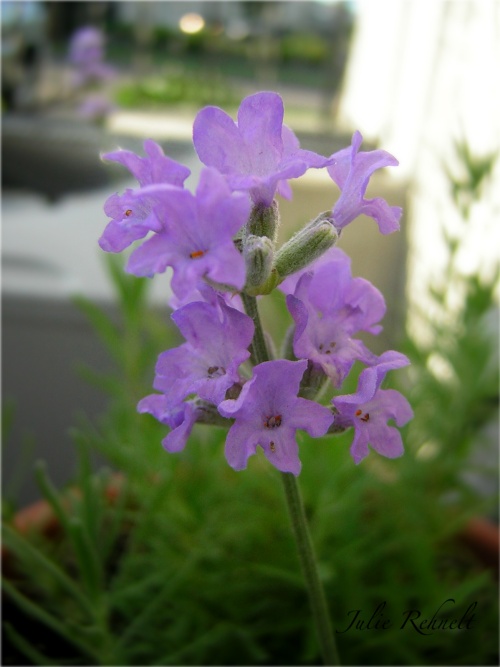 The ants and aphids are still hanging around doing their thing, but don’t seem to be causing any real damage at the moment.  I’ve just been spraying them off with the water hose for now, but I’m keeping an eye on them…