Earlier this spring while we were busy at work building my garden box, my sis and I talked about canning some strawberry rhubarb jam once the season rolled around.  She is the one who taught me how to can so many years ago and it had been such a long time since we canned together.  So we asked our mom if we could use her kitchen for the production (and believe me, if you’ve ever canned… you know it is indeed quite a “production”) and she agreed.  Moms and big sisters are the best ~ especially mine!  ♥

As the rhubarb in my sis’s yard ripened, we waited anxiously for email updates from Berry Hill Farm where we usually get our berries, to hear when their strawberries would be ready for picking.  On the day the email arrived we quickly decided on which day we would have our canning adventures.  I say “quickly” because sometimes the season is short and the window of opportunity can easily pass you by.  And it did.  😦  Even though we made our plan to get our strawberries on the 4th day after the berries would be ready, we received another email from the farm saying they were pretty much all done.  What?!  Talk about disappointment.

But we would not be thwarted.  We decided to call around and found strawberries elsewhere.  Cheaper and organic!  Although that’s a great thing, that’s not to say we won’t try again next year to still get them from Berry Hill because even though their strawberries aren’t organic, they are local and family owned, and that’s what we want to support.  I’ve been going to Berry Hill for my strawberries for over 10 years and I’m not about to stop now.

Our canning day arrived with a boom.  Boom meaning… a thunderstorm.  What a wonderful way to wake up (or go to sleep for that matter ~ thunderstorms are one of my favorite things ♥) and I swear even my coffee tasted better while I was sipping it and listening to the thunder.  😉

But it presented a bit of a problem when it came time to leave my apartment and head over to my mom’s.  I left while there was a slight break in the rain, but just as I was getting onto the freeway it started to hail.  And hard.  Driving 60 mph in the hail = yikes!   Luckily when it really started pounding against my windshield I came upon an overpass, so I pulled over for a little while underneath it and waited until the hail stopped.

I was about halfway to my mom’s when she called to tell me that her power was out.  Power out?  Wait, how are we going to can?  She said she had called the power company and they told her it was expected to be out for the next 3 hours.  Ugh.  Canning takes a long time, so 3 hours is a huge delay.  But what can ya do?  Just gotta go with the flow I guess.  Yep, that’s about the only option.  I can’t control the weather, and although I’m pretty talented… I definitely can’t repair power lines.  It’d be pretty bad-ass if I could though wouldn’t it?   😉

But even though it felt a bit like the universe was conspiring against us, we did eventually do the can-can and made some jam-jam…

First off, we filled up my mom’s dishwasher.  This is the fastest and easiest way I know of to clean all of the jars and keep them piping hot until we’re ready to fill them up with the “good stuff.”  This is not exactly sterilizing them as is recommended for canning, but it has always worked fine for me to do it this way.

Feast your eyes on these beautiful red ripened strawberries!  Too many of them to count ended up in our tummies along the way because they were simply too delicious to resist!

My sis was out battling the thunderstorm and picking rhubarb out of her yard before she met me over at my mom’s.  What a trooper.

And she was in charge of chopping up the rhubarb too…

I was in charge of preparing the strawberries (and eating them ;)).  Except I was doing it wrong.  I was wasting way too much of the berry by just haphazardly chopping their heads off.  I have strawberry corer thingy, but I forgot it at home, and because we were already three hours behind and had TWELVE pounds of strawberries to do, I guess I was just being hasty.

But after my sis pointed it out and made me feel guilty by showing me the error of my ways, I was much more careful (and slower) and did the rest properly.

Then I had to mash them all up.  But my sis’s potato masher totally sucked and my mom didn’t have one, so it wasn’t very fun and I more than kinda hurt my girlie hands. 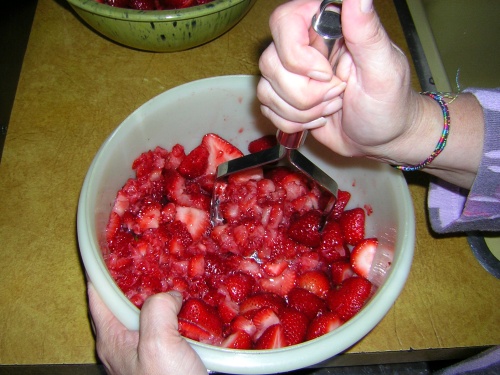 After I finished wrestling with my sis’s potato masher and she finished chopping up all the rhubarb, we dumped it all into a pan, and then added some lemon juice… 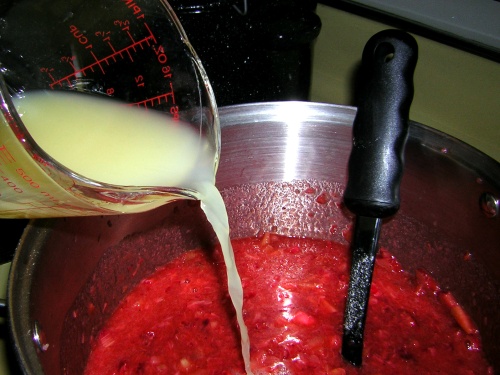 and some sparkly sugar.

And speaking of sugar, here’s our huge 10 pound bag of sugar… 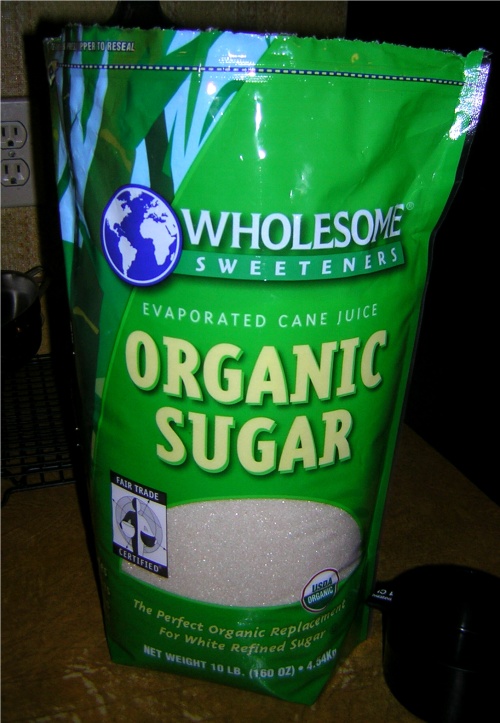 which still wasn’t even enough sugar for all the jam we were planning to make.

After bringing the jam to a boil for 1 minute, it was time to ladle it into the jars, which was my job… 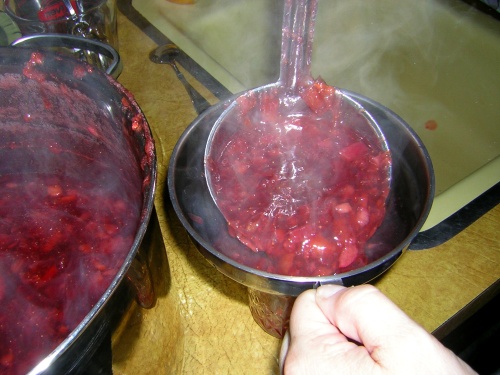 and my sis’s job was to put on the lids…

Then it was time to give them a nice hot bath.

Give me 10 minutes on the clock please (for some reason I just heard the voice of Richard Dawson from the Family Feud as I typed that). 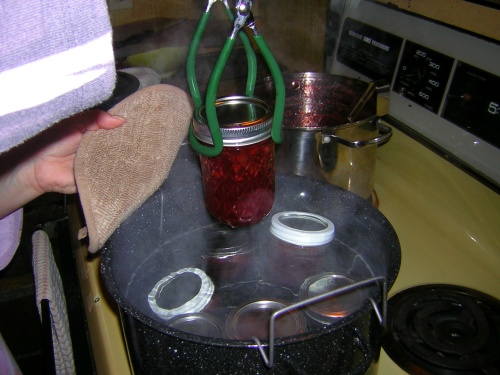 Now to let them cool…

We put our jam in all different various sized jars from 4oz to 8oz.  I like the little 4oz size for gift giving.  🙂

My sis found a recipe for rhubarb orange jam that she wanted to try too, so we made some of that in addition to the strawberry rhubarb.  It tastes amazing and has definitely become one of my new favorites!

It was storming all day which was perfect for canning, but not so good for taking photos.  Between the darkness of the skies and the dim lighting in my mom’s kitchen, I had to use the flash on the camera, so I’m not real crazy about how they turned out. 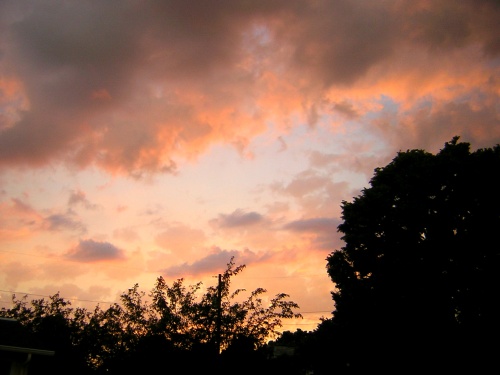 Even after canning 50 jars of jam, and eating tons along the way, we still had left-over strawberries.  I’m using some to make a strawberry pie and my sis is freezing some to use later for her delicious smoothies.  I love strawberry season!

Soooo excited to find that some of my seeds are sprouting!

Look at my happy little broccoli’s!

They’re in a crowded little cluster here because they get planted in groups of 6 and then get thinned once they reach 2 inches high.

My spinach is popping up too!

These are planted in groups of 3.

Only found 1 of the 13 Peas I planted sprouting up so far, but it’s still early yet and I have no doubt they’ll all be popping up soon! 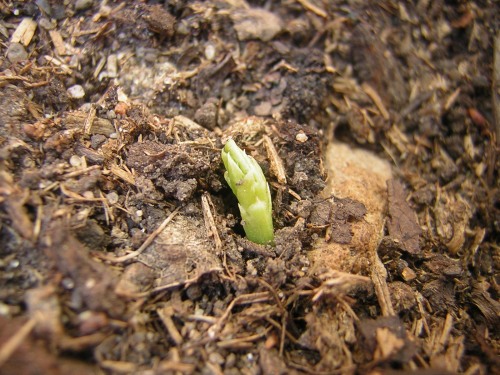 After all of the excitement over seeing my newly planted seeds growing, my daughter and I went around my mom’s yard and snapped a few photos of the other various things we found growing too…

I don’t even remember how many years ago I planted these yellow tulips for my mom, but it’s so wonderful to find them still coming up every spring. 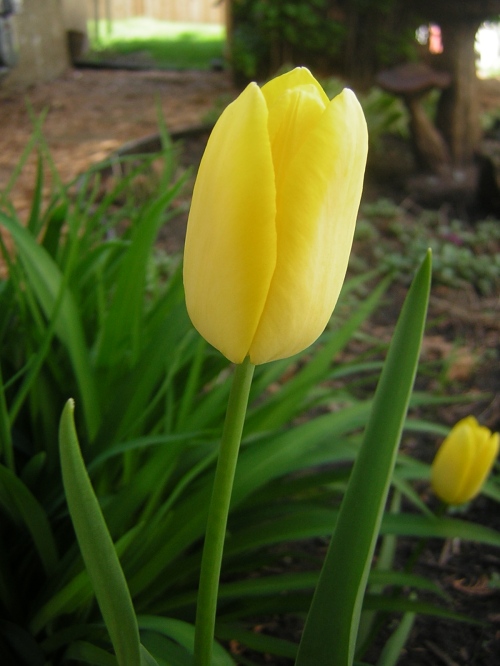 Here is one of my most favorites ~Lily of the valley!  They are just starting to bloom… 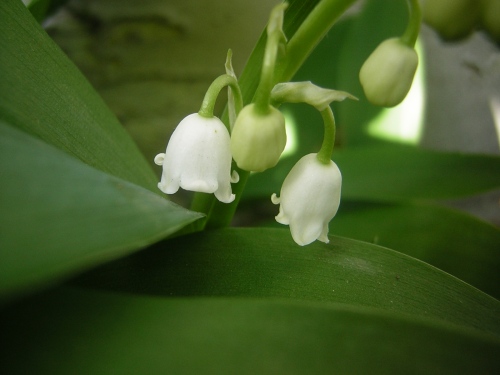 My grandmother planted these along the side of the house when my mom was just a teenager, so these have been around for quite a while.  Last spring when my dad was in hospice at home, I would pick some of these every day and bring them in to him.  I can still picture him holding them up to his nose, closing his eyes, breathing in deeply, and enjoying their beautiful fragrance.  I miss you pops. ♥

Later on, we took a drive over to my sis’s and found that the rhubarb growing in her yard was coming along nicely…

And the strawberries are flowering as well…

We have plans to can some strawberry rhubarb jam as the strawberry growing season progresses.  It’s been a couple of years since I’ve canned so I’m pretty excited about it!

I had this “grow” stone decorating my own garden for several years and passed it on to my mom for her garden when I moved.  I like to think of it as just giving the plants a little extra encouragement to GROW… 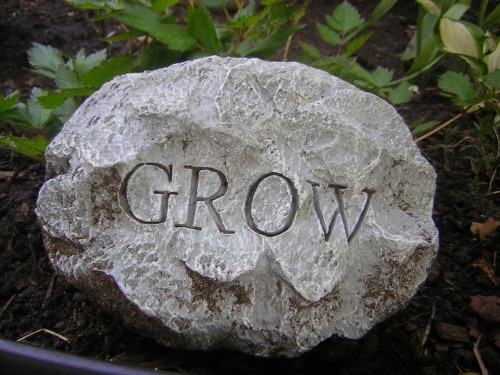 How is your garden growing?